three-quarters (73.5%) of respondents to a recent survey by Big Park Regional Coordinating

Council (BPRCC). Just over half (52.6%) favored burying the powerline that, as proposed,

connecting to APS’s Oak Creek substation.  Another 38% equally favored one of two battery

storage) – in lieu of a new powerline. 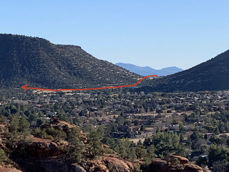 APS must secure special approval from the U.S. Forest Service for construction of the high-

by national forest land. APS has said the new powerline would serve as backup during power

“We were very pleased to see a high response rate, which indicates an incredible amount of

interest in the proposal,” Camille Cox, president of BPRCC, said.  “The survey results will help

letter to the US Forest Service on its draft Environmental Assessment (EA) of the project.”

The Forest Service is expected to request public comment on the draft EA later this spring.

* Nearly two-thirds of respondents (66.8%) considered power outages in the Village over

the last five years to be either minor or moderately inconvenient.  Only 10.9% said

outages have been disruptive.

* More than two-thirds (69.5%) said a new powerline was not important or not at all

important.  Just under a quarter (24.5%) said it was important or very important to build

which would help fund new investments in infrastructure.  Only 10.4% supported or

* Respondents were roughly divided on a battery storage facility, given a 2019 fire at an

APS battery facility in Surprise.  Some 54.9% said they would be concerned or very

concerned if a battery storage facility were selected as a condition by the Forest Service,

while 39% were not concerned, including 22.5% who said they would support a battery

* Regarding a community microgrid partly powered by solar energy, respondents were

less concerned with just over half (54.1%) saying they were not concerned, not at all

concerned, or supported a community microgrid.

individuals on  BPRCC’s subscribers list for its 25 homeowner associations, business

representatives, and individuals who signed up to receive BPRCC information.  Several

homeowner associations, members of the BPRCC, also encouraged their residents to respond.

An article encouraging participation in the survey was published in the Feb. 2 edition of The

The questions and survey results may be reviewed here (link to view/download PDF of survey).