Keep up with our community's progress on the Big Park-VOC Vision Statement and Community Plan. This effort is part of Yavapai's County's 10-Year Update to the Comprehensive Plan.  Take the first local survey to assure that your voice is included, as we participate in mapping the future of the Big Park region.  www.villageplan2022.org 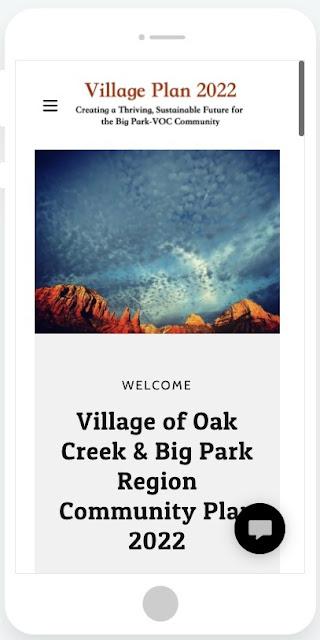 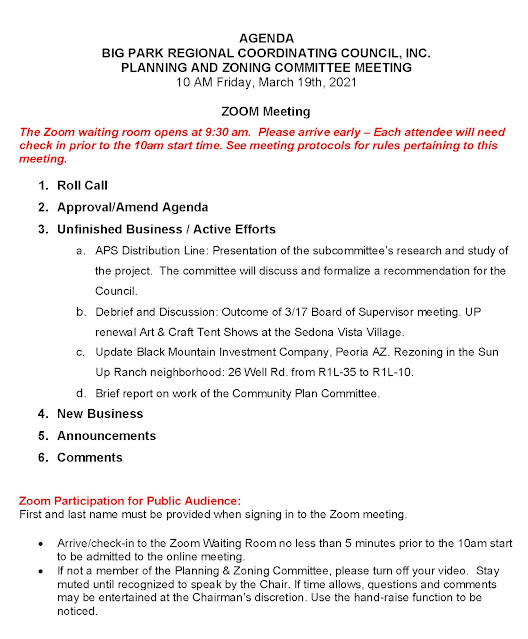 Public Agency Report Joanna McPherson of the Sedona Village Learning Center reported that pre-school enrollment has been increasing, with ½ of the students benefitting from scholarship assistance. Other exciting changes include a new Spanish immersion component, community-wide Halloween Pet Parade and Black History Month celebration. Sixteen children are currently enrolled, with an expansion goal of 24. More than $50,000 has been raised for programming and scholarships. www.SedonaVillage.org.

Treasurer’s Report:  Treasurer Patty Reski thanked Neil Pope for handling February receipts and expenses while the bank processed transition of signature authority. A refund was received from the Sedona Fire District for unused, 2020 pre-paid room rental. As the BPRCC financial situation is precarious, Patty cautioned that the Council to begin consideration of a dues increase for 2022.

Revised Bylaws Review Session:  As information is presented and Council discussion proceeds, straw votes are taken on specific questions to provide direction to the committee on revisions.

Article III – Representation: Co-Chair Nancy Maple continued the Council review of Article III Representation with a summary of historical controversies regarding Representation and “One-person/One-vote”.   A requirement that Representatives and Alternates be a member of the organization they represent narrowly passed the straw vote and will move ahead.   With the advent of Zoom meetings and potential hybrid meetings in the future, many of the concerns about the inability of Representatives to attend in person have been addressed, and One-person/One-vote was agreed.  Alternative bylaw revisions were suggested to ensure that One-person/One-vote would be unambiguously assured in the future.  It was agreed is that if a Rep/Alt is selected by another member organization, it shall be in a non-voting capacity.  To permit flexibility within this system, it was further agreed that the Rep/Alt representing more than one member organization would declare at each meeting which one he/she would be voting on behalf of at that meeting.

Article VI – Officer Roles & Responsibilities: Committee member Carolyn Fisher lead the discussion.  It was agreed to add “or until their successor is elected” to Officer terms of office.  It was further agreed that the current by law description of the President as CEO of the Corporation, who presides over meetings, is Chair of the Executive Board and signs documents on behalf of the corporation was appropriate. The Council agreed with the current bylaw permission for the President to serve ex-officio on all committees, except Nominating.   Agreement was unanimous to preserve the President’s ability to appoint Committee Chairs with Council approval, and to give Committee Chairs the ability to appoint their committee members. The President’s ability to remove a Chair without Council approval is kept, noting that the appointment of a new Chair would need to have Council approval.  The role of the Vice President as described in the current bylaws was agreed, and the role of the Treasurer was also agreed adding that a maximum of $250 total in unbudgeted expenses in a single month could be paid without Council approval.  The role of the Secretary was agreed to be Recording Secretary for the corporation taking and distributing Council Minutes. It was further agreed that a Policy document would be written concerning minutes of Executive Board and Committee meetings. The immediate Past President will continue to be a voting member of the Executive Board provided he/she had not been removed from office for cause

Next Steps Mary Pope thanked the Council for working through this long and complex process, noting that there are only two Articles left to review in April with final Notices and voting in May/June to complete the review process.

Articles I & II NOTICE Review Because the meeting was running long, and these Articles were previously discussed at length, it was agreed to email this presentation to Representatives. Any additional questions will be answered during the discussion period in April prior to the vote.

P&Z Committee:
Village Vet Hospital Chair Mary Morris reported that the Village Vet Hospital Use Permit Amendment involved a downsizing of their plan that was approved by the Council in 2019. The P&Z committee recommended approval with the stipulation of interior soundproofing in the sections of the building that housed animals. A motion to accept the committee’s recommendation passed unanimously.

Sedona Vista Village Tent Show The chairman related new information that tenant improvements for Pisa Lisa restaurant were approved by the County.  Open parking will be impacted in the tent show area. Sedona Vista Village was recently permitted for the in-process construction in the back lot, which will provide an additional 20 spaces for hotel guests and employees. It was disappointing that the P&Z Commissioners appeared to have not been provided with the BPRCC information prior to the hearing last month, given the questions that were asked. The P&Z Committee will be presenting to the Supervisors, citing safety and other concerns as per the Council’s recommendations.

APS Powerline Project Duane Thompson, subcommittee chair, summarized discussions with Arizona Public Services (APS) and the US Forest Service, noting that APS claims that a battery system would cost 3x as much as overhead powerlines and they are now considering burying some of the lines. No details were provided as to where or how much of the powerline might be buried. He invited all to attend the P&Z Committee meeting on March 19th at 10am to learn more. The results of the community survey on this project were provided to the local press, posted on the Council website and circulated to the BPRCC email subscriber list.

Community Plan Committee:  Chair Camille Cox reported that the new Sedona Arts Academy is proving to be ideal for the committee meetings –  comfortable, convenient, well-equipped with A/V equipment and strong internet. The committee’s experience with a hybrid (Zoom + in-person) meeting format is working beautifully. She thanked the Sedona Village Partnership for their generous $1200 donation to the Community Plan project, as well as an anonymous donation of $1000, $150 by Monique Kristofors, and other smaller amounts by committee members. A standing meeting schedule has been established and reserved at the SAA. Meeting dates are posted on the Council's website calendar.

Announcements:  Lenore Hemingway requested that the Council reach out to the US Forest Service for an update on new trails being planned. There is currently little community visibility of proposals until it is too late. Paul Sullivan agreed to follow up.

Verde Valley School will hold the 5th annual Dream Run as a virtual event open to the public on March 20, 2021. The Dream Run is a great opportunity for runners and walkers to celebrate the official first day of spring while supporting Native American students.
All proceeds from the event support tuition scholarships for Native American students attending VVS, providing them access to a life-changing education.
Everyone is welcome to join the VVS Dream Run “Around the World”! Those joining virtually are encouraged to run anytime on or before the event date.
Registrants can show their support by wearing the Dream Run race bib wherever they are. They may even choose to listen to the special Spotify playlist called VVS Dream Run, filled with music from artists who have shown their support for the VVS Native American Scholarship.
After completing a 5k or 10k, participants can post their own race times to the VVS Dream Run webpage and see photos and social media from other participants around the world. 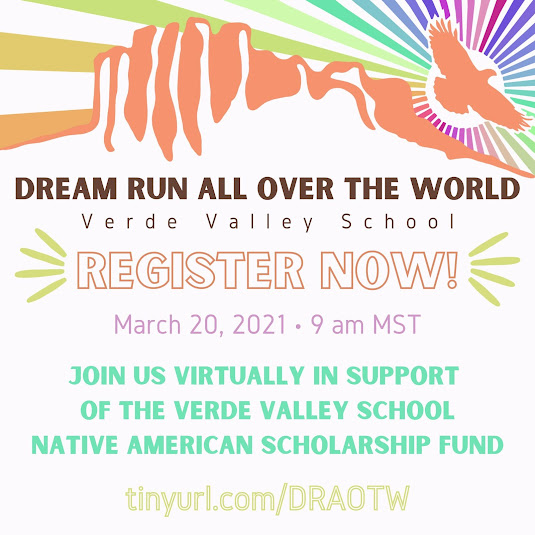 Posted by Camille Cox, President at 11:52 AM

Note the New Date Due to Weather 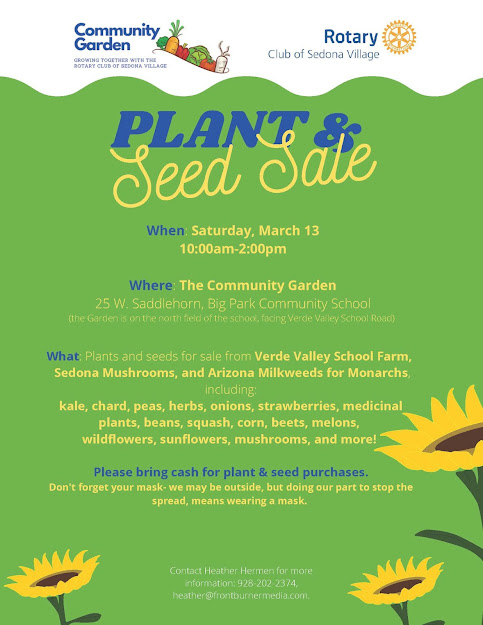 BIG PARK REGIONAL COORDINATING COUNCIL, INC.
9:00 A.M., Thurs, March 11th, 2021
ZOOM Meeting
The Zoom Waiting Room opens at 8:30 am.  Each attendee will need to check in prior to the 9am start time. Please arrive early so you can be checked in by the host.  See meeting protocols for rules pertaining to this meeting.  If you'd like to join this meeting, send an email to info@bigparkcouncil.org with your full name and email address.
Adjourn
Reminders:
Next Executive Board Meeting: Tuesday, March 30th  2pm  location TBD
Next Regular Meeting: Thursday, April 8th 9am via Zoom
BPRCC Zoom Meeting Guest EtiquetteNOTE:  Please make sure you are familiar with the Raise Hand function of the application.  This is important to having an orderly and efficient meeting.
Posted by Camille Cox, President at 1:40 PM

Let the County Know What’s Important to YOU

The first public survey for gathering citizen input on land use decision-making just went LIVE!  The survey itself was a collaborative effort by Yavapai County Development Services staff, KSB, interested citizens, and your BPRCC community plan committee. This survey covers high level topics that counties are required to address in the state-mandated Comprehensive Plan.

You’ll find a link to the survey on our website HOME page. It is the first Quick Link on the upper right column.  It’s a quick 10-15 minutes start to finish, and you can respond to all the questions or just those of importance to you.  All adult members of your household may submit a survey.

BPRCC community plan committee is developing a localized survey that will touch on our “hometown” issues and guide the creation of our Vision Statement and Plan.  Committee section leaders are working on the foundational research and reports, and we are aiming for April to launch that survey.  Additional surveys may also be forthcoming from the County.