Public Agency Report  Paul Amadio, Head of School for the Verde Valley School (VVS), updated the Council on the history and vision of the institution. He reported that none of the 300-acre property is currently for sale. The international college prep boarding high school has 125 students from around the world, comprised of 35 local day students and 90 boarding. The school strives to serve as an example of sustainable practices and programs for its staff, students and the community.

Many years back, VVS partnered with Camp Soaring Eagle to develop a portion of the property as a camp for terminally ill children. That project never came to fruition.  As a result, VVS holds two Conditional Use Permits from the county – one for the school and a second for the camp. Yavapai County is now encouraging the school to apply for updated permits to accommodate the institution’s intended usage for the next ten years. Paul described some new uses that VVS envisions: a farm for educational and commercial production; updating unfinished buildings and partnership programs. Specific ideas being explored include: creation of natural walking and bicycle trails; an arboretum; development of stand-alone, off-grid accommodations for guests and staff; restoration of native vegetation; and projects to decrease the carbon footprint of the campus.

He stressed keeping the land pristine and honoring the native peoples who once inhabited the land.

New Business  In follow-up to September meeting suggestion, Council Representative KC Kinsey and Candace Strauss, president/CEO of the Sedona Chamber of Commerce & Tourism Bureau, explained how BPRCC membership in the Chamber could bring value to the community.  As both a resident and general manager of the Hilton Hotel, KC was able to share a dual perspective - emphasizing that membership would grant BPRCC a seat at the table in discussions that impact the Greater Sedona area, including the VOC. Candace emphasized that the chamber serves the greater Verde Valley area, not just businesses located in Sedona proper. She noted that the Council’s participation at the last Pulse event was well received and the chamber wants to hear more from the VOC.  A non-profit annual membership is $150 and runs 12-months. Two Representatives offered to fund a portion of the cost.

Candace explained that the chamber is currently focused on education that encourages visitors to recreate responsibly. She mentioned the Off Highway Vehicle (OHV) concerns and the upcoming Sedona City Council meeting at which these would be addressed. Several council representatives noted that they were chamber members and found participation to be highly valuable. It was moved and unanimously passed for the BPRCC to become a member.

President’s Report  Camille presented a State of the Council report, beginning with a flashback to January 2020 and input she received from one-on-one discussions with 21 member representatives.  She summarized how well the Council has delivered during the past two years on the requested actions. Value has been delivered in the expansion of authentic community input to the County via polls, surveys and open discussions.  Information is being shared publicly via articles in the Villager, the View and the Arizona Republic.  She outlined the research done by the Council on community issues such as the APS powerline, Emergency preparedness, bylaws update, and COVID health and safety information, noting that the Council coordinated and promoted two community vaccination clinics. Timely information from the County to the VOC regarding development has been done for all zoning applications such as the Village Veterinary Hospital, Art & Craft Tent Shows, Horse Mesa Ranch and the proposed AT&T 5G tower. Camille mentioned that relationships with County personnel have improved significantly and a new evaluation system for providing guidance to the County has been well received. BPRCC meetings are now modeled on a code of conduct. The public has been engaged and transparency improved via local media, open meetings, published highlights and website postings.  Lastly, she noted that a formal Dark-Sky Committee was created and has grown to nine active members.

Summarizing big improvements in communication, she outlined the evolution of meeting effectiveness beginning with a borrowed PA system that enabled improved exchange of information and discussion. She emphasized the improvements made in the quality and frequency of email notifications, with a remarkably steady subscriber list of approximately five hundred. The Council has made significant headway with local media relations.

She emphasized that most of the challenges identified by the community are regional in nature, not specific to the VOC, and stressed the importance of connection, engagement and collaboration with neighboring Verde Valley communities.

Future Meeting Format Survey  Secretary Mary Pope then summarized results of a survey of representatives and alternates on future meeting formats.  Nineteen of 26 member organizations responded. This survey was a starting point for deciding how and when to resume in-person meeting. Results reflected that health and travel concerns among the membership prohibit a return to in-person only meetings at this time. Sentiment on various advantages and disadvantages of in-person and/or virtual meetings (or a hybrid combination) were weighed, and some of the technology challenges were described. The secretary suggested that a new task force be formed to research and provide the council with options.

Camille then outlined the situation by presenting a high-level overview of the costs and capabilities (known and unknown) of local venues, and their ability to support a hybrid meeting format. She asked the Council to consider what it will take to sustain our momentum in coming years, including financial resources and leadership.

Secretary’s Report  Mary Pope reported no changes to membership and that Duane Thompson, chair of the APS subcommittee, was appointed as an alternate representative for the Sedona Golf Resort HOA.
Treasurer’s Report  Patty Reski presented the Budget vs. Actual for September explaining that the $575 in miscellaneous income was primarily a meeting room refund and would not be repeated in the future. She noted that the current bank balance can be misleading as more than 50% is held in reserve for potential insurance deductible. Patty then presented the proposed 2022 budget, complimenting the hard work and research done by the budget committee.  An increase in dues will be necessary as costs are increasing with communication and meeting requirements. She emphasized that the committee has taken a “skinny” approach, keeping proposed increases to a bare minimum. Patty offered to provide additional detail to representatives if they call or email her.  The proposed 2022 budget will be discussed in November and requires a 2/3 council approval to increase dues in excess of 10%.  After the dues vote, the budget itself requires a majority vote to pass.

Nominating Committee Chair Lenore Hemingway spoke on behalf of the committee (Paul Sullivan, Joe Skidmore and Gwen Hanna). She explained their process and the efforts made to communicate with potential candidates. The committee’s nominees are: Patty Reski to continue as treasurer, Mary Pope to continue as secretary, and Duane Thompson for vice president.  Despite their efforts, the committee was unable to recruit a candidate for President.

BPRCC bylaws call for current officers to continue to serve until a replacement is elected. Concerns were raised that this new (June 2021) bylaw requirement was not intended to have an officer serve for an additional term. It was intended to provide continuity until a new officer was elected. There was much discussion about continuing the effort to find a presidential candidate.  Although the bylaws require that nominations be closed at the end of the October meeting, Camille may resign and a later presidential election held, if a candidate is identified.

The president then asked for nominations from the floor.  Dave Norton nominated himself for vice president. With two candidates for vice president, a motion was passed for an anonymous vote via electronic ballot at the November meeting.  The electronic ballot format used by BPRCC meets all of the requirements of ARS 10-3708 entitled “Action by written ballot, online voting” and a permanent record is kept of each vote.  Nominations were then officially closed.

Planning & Zoning Committee  Chair Mary Morris noted that the Use Permit for Horse Mesa Ranch was approved by the county, and that the environmental assessment from the USFS on the APS powerline has been postponed to mid-November.

Emergency Preparedness (EPPiC) Committee Mary Pope reported for Chair Gwen Hanna. Committee members are gathering available information and documents. The committee will review that content before their next meeting as a means of gaining further clarity as the possible ways to create a public resource/depository.  Committee member Bert Tibbet, who passed recently, was memorialized.  Quoting Gwen, “There are certain people who are in our lives for but a moment, but in that moment touch us deeply. Bert was one of those people for me. I hope EPPiC will do him proud.”

Verde Valley Transportion Planning Organization (VVTPO)  Steve Fiedler noted that monsoon storm clean-up is ongoing. He also noted that SR-179 and Cornville Road improvements continue. The county is working on the SR-179/Beaver Head Flat intersection.  Steve also noted that the RRREMD (Red Rock Road Enhancement Maintenance District) is looking into addressing drainage issues on SR-179, and a bench that was hit by a car will be replaced.

Agenda - October Meeting of the Council

ZOOM MeetingThe ZOOM Waiting Room opens at 8:30am.  Each attendee will need to check in prior to the 9:00am start time.  Please arrive early so you can be checked in by the host.  See meeting protocols for rules pertaining to this meeting.
Public Agency Reports
Call to Order
Reminders:
Next P&Z Meeting: There will be no meeting in October
Next EB Meeting: Tuesday November 2nd, 2pm, location TBD
Next Regular Meeting: Thursday, November 11th, 9am, Zoom
Posted by Camille Cox at 11:50 AM

The Big Park-VOC Dark-Sky Committee has completed and submitted the required IDA Annual Report.  Click on the image to view and/or download the report. 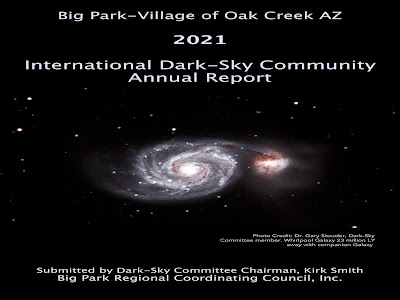