President’s Report  The president began her report by noting that P&Z Committee Chair Mary Morris was stepping away from that position due to health issues and a search was underway for a new chair.  The president said during the interim P&Z Committee member David Gill and she were covering any issues brought to the attention of the Committee.

The president then continued her report regarding a flooding issue adjacent to the Las Piedras development. Las Piedras’ board had notified Big Park Council’s Executive Board of damages sustained as a result of recurring flooding during the past two monsoon seasons.  An APS powerline pole and several sewer manholes were compromised. Further damage to either of these infrastructures could result, respectively, in a loss of power to the VOC or, with regard to the manholes, damage resulting from boulders during runoff could result in closure of the downstream sewer treatment plant.  The president indicated that Yavapai County Supervisor Donna Michaels was contacted and had organized a September 20th meeting of relevant county and local officials at the site to discuss remedial action.  The president noted that this was not a problem limited to a single homeowners’ association but had the potential to affect the entire VOC community.

Treasurer’s Report  Patty Reski noted that a $2,500 reserve was removed at the bottom of the budget sheet due to a change in Directors & Officers insurance policies.  The $2,500 was actually a reserve in the event of any deductibles for claims against the D&O policy, and because the new policy had a zero deductible, that line item was no longer needed.  She added that the recently appointed Budget Committee was scheduled to meet within a few weeks.

Collective Special Use Permit.  The president provided an update on the Special Use Permit for the Collective Sedona.  Due to timing issues with submitting a recommendation to the County, a vote to approve the P&Z committee’s recommendation could not wait until the September Council meeting, thus an electronic vote was conducted.  Results indicated a unanimous vote with 20 of 24 eligible voters supporting a County permit, with one abstention.  Three members did not cast votes.

Bylaw Revision  The Council was asked to vote on a minor change to Article 1, Section 3 of the Bylaws by adding “Big Park Council” as an optional descriptor for Big Park Regional Coordinating Council, Inc., in addition to the existing descriptors of “BPRCC” and “Corporation” was approved in a unanimous vote.

Big Park Council Logo  The Council was then asked to consider approval of the logo featuring a sketch of Bell Rock for use on Council stationery, for name tags, and other purposes.  The logo included the title “Big Park Council” as the other official organizational name was lengthy.  This abbreviated name necessitated the related addition of that name to the Bylaws.  A motion approving the logo was approved in a unanimous vote.

After discussion, it was determined that the Council would proceed with in-person meetings once the treasurer was able to confirm meeting space was available in the Village library at regular day/time that is acceptable to the Council.  Most Council representatives supported continuation of a morning, as opposed to afternoon, meeting. It was agreed to continue with Zoom meetings until the timing issue was resolved.  The treasurer said she would be back in touch with the library executive responsible for meeting space.

Northern AZ Healthcare Services Survey  President Camille Cox reported preliminary results of the survey that the Council produced in collaboration with Supervisor Donna Michaels.  A full report will be published in coming days and distributed community-wide.

Supervisor Michaels provided a brief report to the Council (see slide), summarizing discussions she is having with NAH in an effort to address the kinds of concerns expressed by Verde Valley communities, including the VOC. 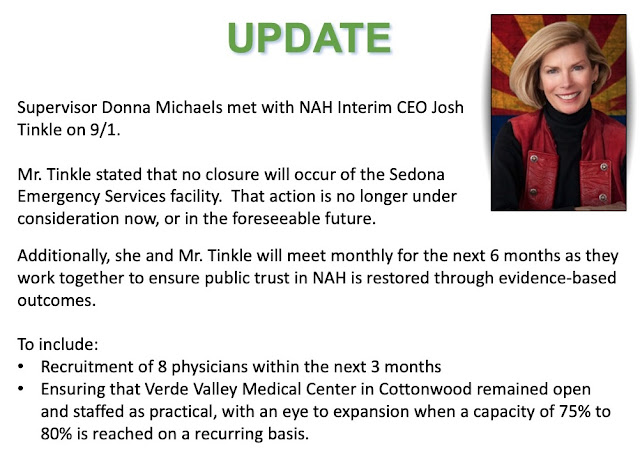 Planning & Zoning  Committee member Dave Norton reported successful resolution to the siting of a new AT&T 5G tower on an elevation opposite The Collective on Highway 179.  The new tower would be a 35-foot high “monopine,” or pine tree-like tower with five antennas, and less obtrusive than a previous proposal.  Steve Olson of Bechtel Engineering is managing the project on behalf of AT&T.  He said his firm was preparing to go through the building permit process with the County and hopes to begin construction of the tower near the end of the first quarter or early second quarter of 2023.  On behalf of the committee, Dave thanked Mr. Olson and his company for their efforts to listen to and understand the community’s concerns and collaborate on a solution that reduced the visibility of the tower installation from the highway and from homes in the Las Piedras development.

Duane described the proposed mitigation – by burying roughly half the 69 Kv powerline underground – as a “half-loaf.”  He noted that while much of the line would be buried along scenic stretches of Beaverhead Flat Road, only a small segment crossing Highway 179 in the Village was proposed for burial.

After a brief discussion, he indicated that the Council would likely be asked to vote on whether it was satisfied with the USFS’ final decision, or whether it should appeal the decision to the USFS regional forester in Albuquerque.

Art in the Roundabouts  Committee Co-Chair Rolf Funk reported that planning was proceeding with a launch event for the project, scheduled Oct. 4 from 4:30-6 p.m. in the VOCA ballroom.  All reps, alternate reps and executive board members have been invited and encouraged to attend.  He said the organization’s Mission Statement has been approved, which “is to display the story of our community with inspiring art.”

In addition, county officials reported on possible renewed efforts by Arizona counties to lobby for legislation allowing larger counties to impose a transient lodging tax, i.e., bed tax, to be collected for certain “economic” purposes.  The president noted that this information will be incorporated into the draft 2022 Community Plan for the VOC.

Nominating Committee  Committee member Carolyn Fisher reported that the committee was still seeking candidates for president and vice president, and asked support from Council representatives in this effort.  She mentioned that candidates should be familiar with the Council, ideally with a couple years of experience.

Dark-Sky Committee  Committee Chair Curt Schneider reported on various activities of the committee.  A Dark-Sky event on Aug. 25 at the Beaver Creek school had disappointing attendance, but with monsoon season over, other events are planned, including a September 30th Star Party at the Red Rock Ranger Visitor Center, beginning at dusk.  In addition, the committee is collaborating the City of Cottonwood to host other events in the future.